Books like This is Book Gay by Juno Dawson and Red, White, and Royal Blue by Casey McQuiston sat atop library shelves in Dearborn Public Schools, Michigan, until last week, when the schools pulled them for review after parents complained of their sexual nature. Many of the books discussed LGBT relationships; This is Book Gay is a non-fiction title with instructions on how to use apps for casual sex, descriptions of sex toys, how to engage in anal sex (“any hole’s a goal”). Other fiction titles contain numerous explicit sex scenes . While it is not a shock that most Americans view pre-marital sex as acceptable, the outrage stemmed from the portrayal of this material as innocuous and even encouraged for young people to engage with.

Arguments against the removal of these books have dismissed Muslim protesters as having fallen victim to far right ideology, engineered by Republican puppet masters into doing the bidding of Evangelicals. Condescending articles like The Growing Religious Alliance to Ban LGBTQ Books compare the outcry to a “madness spreading,” a sort of fanaticism or fundamentalism causing Muslims to betray the minority-supporting Democratic party. This premise is deeply problematic in many ways, paramount amongst them being that Muslims are unable to think for themselves and are easily manipulated. Some have gone so far as to describe the actions of Muslim protestors as they “foist their view on one group of citizens” on others as akin to Hitler.

The rhetoric leveled at protesters is largely ironic, considering that the Left has been long engaging in a subversion of the Muslim community in attempt to capitalize on the alienation perpetrated by the Right. Muslims have largely been convinced into supporting the Left’s social causes as a means to better their own situation regarding issues like discrimination and immigration. While this was successful in opposing Trump’s Muslim ban and pressuring work/school spaces to accommodate Islamic practices, it has been carried out under a banner of inclusion that fails to address conflicting beliefs between different identity groups. The Dearborn example is just one of many that illustrate the dangers of viewing identity as performative rather than substantive.

The premise that Muslims protesting these schools are falling prey to “culture wars” and are victims of a “dangerous ideology” also suggests that Islam is not at all morally opposed to the material being presented in these books. While the Islamic attitude to sin differs from Christianity, it does not mean that Islam gives a green light to hypersexualized content. This is the same case for viewing homosexual acts as a sin. Ironically, one of the books featured in this debate contains a page about Muslim attitudes towards homosexuality stating that the Qur’an does not say homosexual actions are a sin.

For years, Islam in America has been racialized in the political sphere, assumed to be fully onboard the progressive bandwagon, given the decades of discrimination and scrutiny. Since we as Muslims are under the boot with other minorities, we are expected to automatically band together and support all causes amongst the subjugated. This idea supposes that Muslims should abandon their principles in support of an amalgamated idea of a “greater good,” an idea which contradicts the very spirit of Islam.

Leading the charge in disheartening responses is Dearborn’s local legend, Congresswoman Rashida Tlaib, championed as the first Palestinian woman to be elected to Congress as well as one of the first few Muslims to do so. Tlaib took to social media to denounce Dearborn protestors, with a statement insinuating that that the principles driving Muslims to protest are ugly, bigoted, and part of a “well-funded hate machine.” Muslims must either be branded bigots and perpetrators of hate crimes, or compromise their principles. 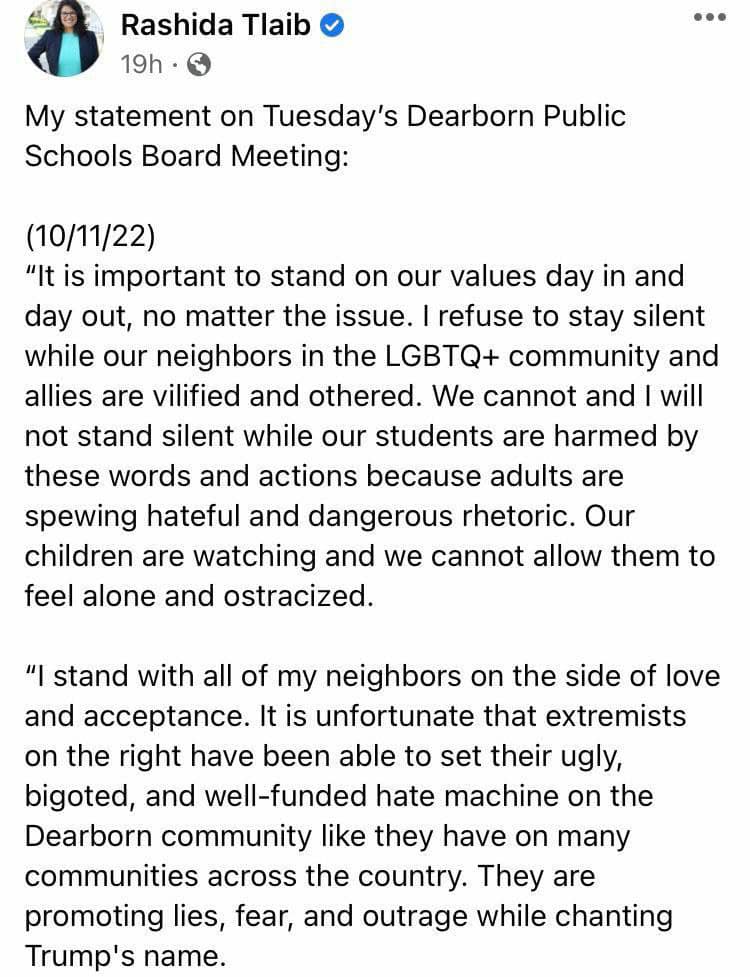 Much can be said about the nature of the Muslim politicians in America, as well as the previous Islamically legal and theological errors Tlaib has committed on public stage. Putting that aside, Tlaib’s statement undermining the very people who got her elected goes to show where her priorities lie, and the Muslims of Dearborn should take her actions as a lesson on who she truly serves.

In an opinion piece that made local news, Imam Dawud Walid, executive director of the Michigan chapter of Council on American Islamic Relations (CAIR), reiterates:

The Dearborn parents who spoke to us were deeply concerned about the sexually explicit material that their childen could access in public school…[for] years, our organization has worked with parents and schools to ensure Muslim students can safely attend school and practice their faith without facing bigotry or discrimination…

CAIR-Michigan did not organize the protests, but community leaders met with Dearborn’s superintendent to address the concerns of parents. Speaking on the parent-led movement, Walid affirmed:

No one is trying to ban books altogether or prevent adults from accessing books of their choice. Parents simply do not want their children looking at pornographic material at school..Neither liberals nor conservatives should have been shocked by our position.

His position is the minimum baseline for any Muslim, layperson or politician, to align with. There is absolutely no excuse for books containing “extremely graphic depictions, descriptions of sexual activity” and “step-by-step instructions” for students, regardless of sexual orientation. Health education involving sexual health should focus on necessary knowledge and disease prevention, not providing how-tos.

We should note here that it is not only the sexual content and explicit nature of the books that are and should be protested. Considering the outrage to be restricted to “only” the pornography-esque presentation and not LGBT is a common refrain, but the situation is more nuanced than that. What is also being protested is the evolving nature of sexuality and hyper-sexualization of society. While Muslim parents remain largely unaware of the pervasiveness of heterosexual sex scenes, even in young adult novels, what is at issue here is the condescending demands that the Muslim community confirm belief in hegemonic ideas about gender and sexuality, or be branded bigots.

There is a legitimate concern about hate crimes towards these communities, but that is not implicated by the aforementioned. In fact, what is disgraceful is the conflation of the above as akin to a hate crime. Muslims have the right to peacefully protest in this country and voice their concerns amidst a forceful liberalization of action and belief by both sides of the political spectrum. On the one hand, Republicans attempt to ban shari’a and advocate an expansion of discriminatory policies; Democrats demand Muslims increasingly concede orthodoxy to better align with secular society.

The Importance of Local Involvement

Lastly, many have suggested that these protests are evidence of an amicable coalition between conservatives and Muslims. Our goal is not to argue whether this is better; ultimately, the Republican party has sowed considerable violence toward the Muslim population. There remain good-faith actors everywhere, and we should ally with those pushing for just and fair policies on an issue-basis, not an unconditional one. On this issue, conservatives largely support religious freedom in stating and abiding by orthodox beliefs on marriage and family.

Islamic scholarship debates the permissibility, type, and degree of political engagement in non-Muslim lands. We can definitely work on a local basis, where our actions and policy-decisions have direct impact. The protests unfolding in Dearborn and clips from the town-hall highlight the necessity of being aware of local government. Many Muslim parents remain ignorant of the local school board, town halls, etc.; being involved in the curriculum taught in public school beforehand is better than reversing decisions and protesting after the fact. Additionally, Islamic educators need to find ways of addressing these issues with teenagers on Islamic terms before schools do.

There are also other minority groups concerned about Muslims’ religious freedoms and are willing to engage in nuanced discussions, even among the LGBT community. It is our job to also engage in good-faith, as the second and third generation of Muslims in America seek permanent livelihoods here, and do da’wah. With the growth of continued normalization of LGBT content under the guise of inclusion and diversity, religious freedoms are under threat. Aside from parents being lambasted for opposing pornography on school shelves, we have seen business owners face Supreme Court-level lawsuits for not wanting to compromise their religious beliefs (see Masterpiece Cakeshop v. Colorado Civil Rights Commission, 584 U.S.).

This entire debacle has been a lesson for Muslims in America. Though Dearborn parents have been courageous, these books remained on the shelves for a long time, and it took recruitment from a Christian woman to get these parents involved. We as a community need to ensure our involvement in education systems, or create beneficial alternatives to spare our children from coming across this. If we are going to send our children to public schools, it is imperative that we are at the forefront of influencing school boards and standards to prevent this and whatever else is to come from happening.

This is also a lesson about the nature of the LGBT movement and what the future holds in store. One might think it is only logical and a consensus amongst mentally sound individuals that pornography should not be accessible to children in school libraries, but the visceral reaction in opposition to the Dearborn protests proves otherwise. The reality is that when a group of people base their entire identity and culture around who they sleep with, it becomes an act of modern blasphemy and cultural censorship to remove such content from open access. This has always been the reality, and Muslims need to wake up and recognize it, or else continue being duped into supporting their cause for an outcome that only serves to harm us.

Photo by Ryunosuke Kikuno on Unsplash

Farhana K. is based out of North America. She is interested in the Islamic sciences and medical ethics.

5 thoughts on “Dearborn Schools and the Protests Against LGBT Books”